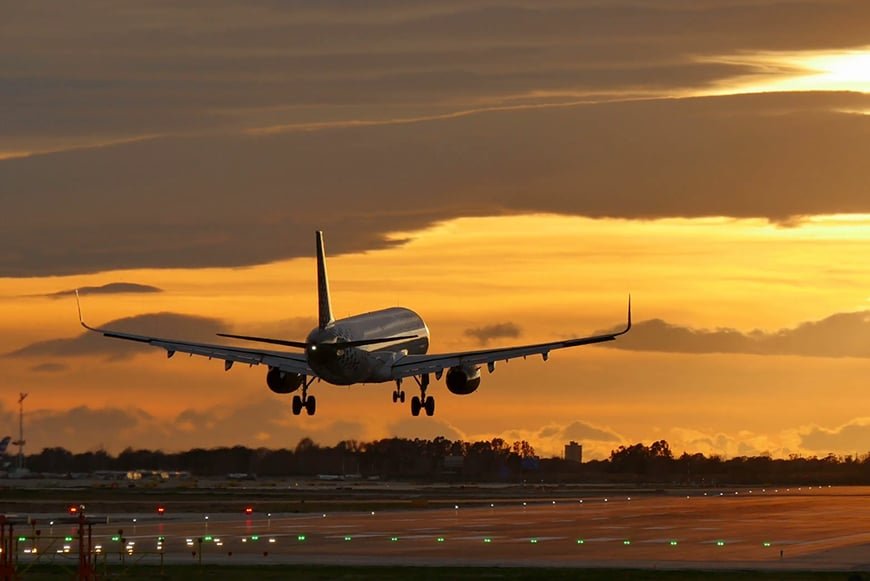 The Wright Flyer was the first successful heavier-than-air powered aircraft. It was designed and built by the Wright brothers. They flew it four times on December 17, 1903, near Kill Devil Hills, about four miles (6.4 km) south of Kitty Hawk, North Carolina, US. Today, the airplane is exhibited in the National Air and Space Museum in Washington D.C. The U.S. Smithsonian Institution describes the aircraft as “the first powered, heavier-than-air machine to achieve controlled, sustained flight with a pilot aboard. The flight of Flyer I marks the beginning of the “pioneer era” of aviation.

The Flyer was based on the Wrights’ experience testing gliders at Kitty Hawk between 1900 and 1902. Their last glider, the 1902 Glider, led directly to the design of the Flyer.

The Wrights built the aircraft in 1903 using giant spruce wood as their construction material. The wings were designed with a 1-in-20 camber. Since they could not find a suitable automobile engine for the task, they commissioned their employee Charlie Taylor to build a new design from scratch, effectively a crude gasoline engine. A sprocket chain drive, borrowing from bicycle technology, powered the twin propellers, which were also made by hand.

The Flyer was a biplane configuration. As with the gliders, the pilot flew lying on his stomach on the lower wing with his head toward the front of the craft in an effort to reduce drag. He steered by moving a cradle attached to his hips. The cradle pulled wires which warped the wings and turned the rudder simultaneously. 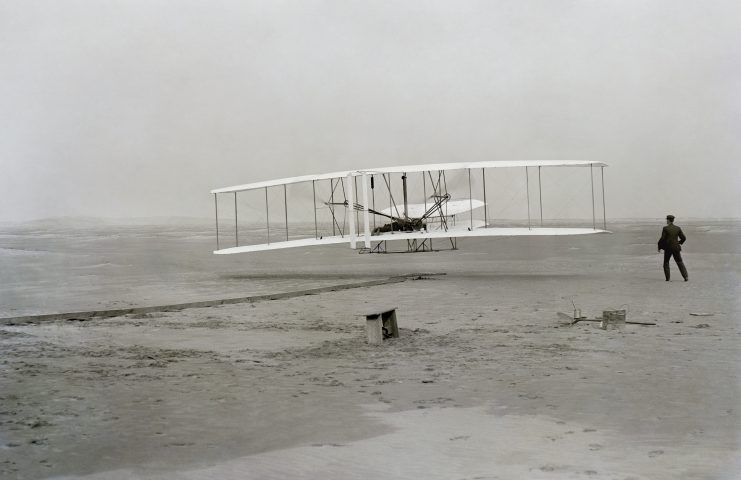 The Messerschmitt Me 262 was the world’s first operational jet-powered fighter aircraft. Design work started before World War II began, but problems with engines, metallurgy, and top-level interference kept the aircraft from operational status with the Luftwaffe until mid-1944. The Me 262 was faster and more heavily armed than any Allied fighter, including the British jet-powered Gloster Meteor. One of the most advanced aviation designs in operational use during World War II, me 262’s roles included light bomber, reconnaissance and experimental night fighter versions.

Me 262 pilots claimed a total of 542 Allied aircraft shot down, although higher claims are sometimes made. The Allies countered its effectiveness in the air by attacking the aircraft on the ground and during takeoff and landing. Strategic materials shortages and design compromises on the Junkers Jumo 004 axial-flow turbojet engines led to reliability problems. Attacks by Allied forces on fuel supplies during the deteriorating late-war situation also reduced the effectiveness of the aircraft as a fighting force. In the end, the me 262 had a negligible impact on the course of the war as a result of its late introduction and the consequently small numbers put in operational service.

While German use of the aircraft ended with the close of World War II, a small number were operated by the Czechoslovak Air Force until 1951. Captured Me 262s were studied and flight tested by the major powers, and ultimately influenced the designs of post-war aircraft such as the North American F-86 Sabre and Boeing B-47 Stratojet. Several aircraft survive on static display in museums, and there are several privately built flying reproductions that use modern General Electric J85 engines.

The ME 262 was introduced to the world as a fighter jet, but the idea of having jet engines helped the aviation industry and the development of bigger, faster and more reliable civil aircraft. 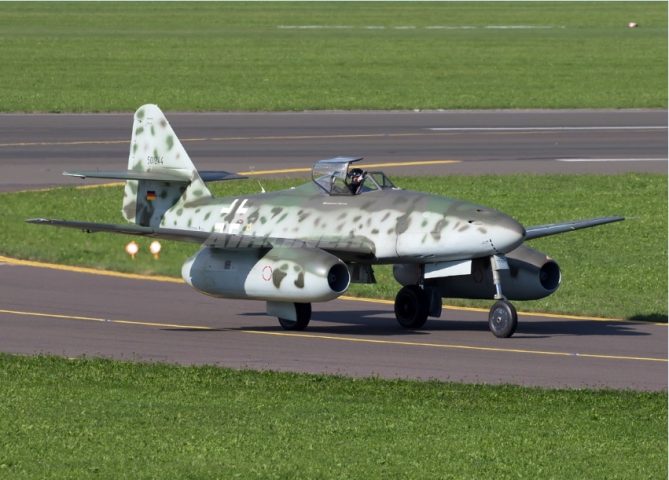 The Boeing 747 is an American wide-body commercial jet airliner and cargo aircraft often referred to by its original nickname, “Jumbo Jet”. Its distinctive “hump” upper deck along the forward part of the aircraft has made it one of the most recognizable aircraft, and it was the first wide-body airplane produced. Manufactured by Boeing’s Commercial Airplane unit in the United States, the 747 was originally envisioned to have 150 percent greater capacity than the Boeing 707, a common large commercial aircraft of the 1960s. First flown commercially in 1970, the 747 held the passenger capacity record for 37 years.

The four-engine 747 uses a double-deck configuration for part of its length and is available in passenger, freighter and other versions. Boeing designed the 747’s hump-like upper deck to serve as a first–class lounge or extra seating and to allow the aircraft to be easily converted to a cargo carrier by removing seats and installing a front cargo door. Boeing expected supersonic airliners—the development of which was announced in the early 1960s—to render the 747 and other subsonic airliners obsolete, while the demand for subsonic cargo aircraft would remain robust well into the future. Though the 747 was expected to become obsolete after 400 were sold, it exceeded critics’ expectations with production surpassing 1,000 in 1993. By June 2018, 1,545 aircraft had been built, with 23 of the 747-8 variants remaining on order. As of January 2017, the 747 has been involved in 60 hull losses, resulting in 3,722 fatalities. 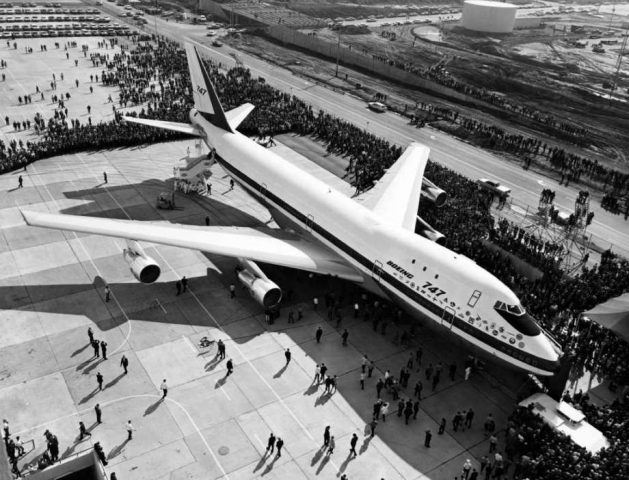 The BAC Concorde is a British-French turbojet-powered supersonic passenger airliner that was operated from 1976 until 2003. It had a maximum speed over twice the speed of sound at Mach 2.04 (1,354 mph or 2,180 km/h at cruise altitude), with seating for 92 to 128 passengers. First flown in 1969, Concorde entered service in 1976 and continued flying for the next 27 years. It is one of only two supersonic transports to have been operated commercially; the other is the Soviet-built Tupolev Tu-144, which operated in passenger service from 1977to 1978

On 10 April 2003, Air France and British Airways simultaneously announced they would retire Concorde later that year. They cited low passenger numbers following the 25 July 2000 crash, the slump in air travel following the September 11 attacks, and rising maintenance costs. Although Concorde was technologically advanced when introduced in the 1970s, 30 years later, its analogue cockpit was outdated. There had been little commercial pressure to upgrade Concorde due to a lack of competing aircraft, unlike other airliners of the same era such as the Boeing 747. by its retirement, it was the last aircraft in the British Airways fleet that had a flight engineer; other aircraft, such as the modernized 747-400, had eliminated the role 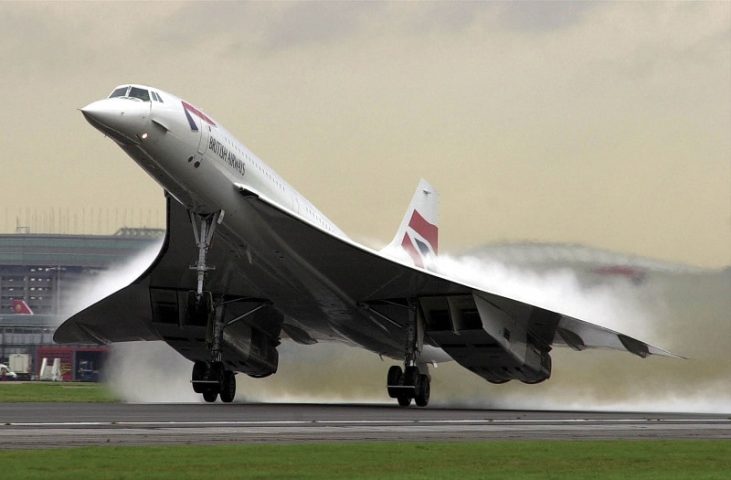